The Burnett Mary region is located in overlapping climate zones with tropical influences to the north, predominantly subtropical lowlands in the south, and temperate climatic conditions in the Bunya Mountains to the south west of the region.  The area also spans two biogeographic regions: the Southeast Queensland Bioregion in the east, and the Brigalow Bioregion in the west.  See map.  The region’s variety of climates, soils, vegetation, topography, and historical management by indigenous peoples and others make it a region of great ecological diversity.

Remnant vegetation covers about 45% of the region, with most of this existing in public estate lands and a large proportion in State forest.  Areas with very high biodiversity values within the region include the Fraser Island / Cooloola Coast, Cania Gorge, Bunya Mountains, Kinkuna / Woodgate, Bustard Bay, Bulburin, Conondale / Kilkivan range and the Burrum-Cherwell catchments.  These areas have large tracts of relatively intact remnant vegetation, providing habitat for numerous threatened species and serving as major bastions for biodiversity.

The Burnett Mary region contains the State’s highest number of priority species requiring urgent attention through improved conservation practices.  Communities under threat include semi-evergreen vine thicket, Brigalow, and littoral rainforest.  Key threatening processes to biodiversity in the region are a result of ongoing reduction in the extent and condition of native habitat.  Clearing for agriculture and the continuing demand for land for urban growth, particularly along the coast, continue to place pressure on an already fragmented natural environment.

The intrusion of threatening processes6 further threatens the condition and extent of terrestrial ecosystems.  Unchecked threatening process6 incursions adversely alter ecosystem function, reduce primary industry productivity and profitability, and seriously limit the long-term sustainability of natural systems.  They can increase the risk of fire, change the structure of vegetation, increase costs for infrastructure maintenance and reduce the amenity of recreation areas.  The coupling of effective threatening process6 control with appropriate land management is critical to maintaining or improving terrestrial ecosystem function.

Altered fire regimes have also been identified as a significant threat to priority native flora and fauna in the Burnett Mary Region.  Examples include grassland decline in the Bunya Mountains associated with low fire frequency, and declining condition of rainforest boundaries caused by too frequent fire associated with invasive pasture grasses.  Projected climate change scenarios raise the spectre of a more intense “fire weather future”, posing an overarching threat to the structural integrity of many of the region’s terrestrial ecosystems.  Extended drought periods, reduced Spring rainfall and more frequent “fire weather” periods, overlain on the inherent temperature tolerances of species and ecosystems, will challenge the current extent, structure and integrity of terrestrial ecosystems.

Improving the condition and relative connectivity of our native vegetation and freshwater ecosystems is the best way to increase their resilience to long and short term environmental changes.

The following table identifies collections of like BVG’s, a detailed description of the constituent assets in Background paper – Plants and Animals. 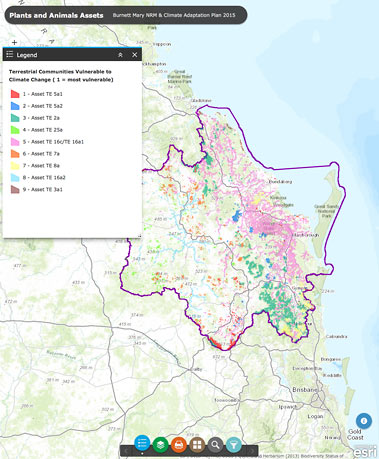 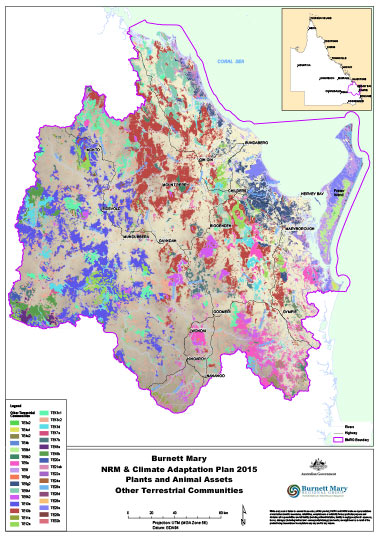 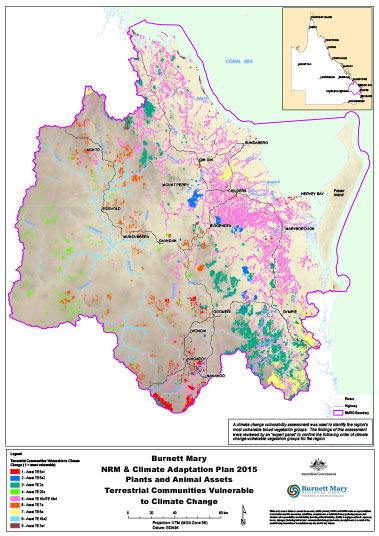 The vulnerability of each BVG (terrestrial ecosystem asset) to relevant climate change exposure indicators – temperature increases, increasing lengths of dry periods, decrease in Spring rainfall and more frequent and intense fires – was assessed by an expert panel.  The Background paper – Plants and Animals details the vulnerability assessment method.  An order of the ten most climate change vulnerable TE assets, under the RCP8.5 2090 scenario, was identified.  The map, Plants and Animals displays these vulnerable communities, as well as all other mapped BVGs.  In general, the assessment revealed that elevated closed rainforests and scrubs, associated wet sclerophyll forests, Brigalow communities on clay substrates and some floodplain woodlands were most vulnerable.  A further meeting of vegetation/ecosystem experts considered the nature of threats and protection of each of these assets.  Recommendations regarding their future management were made and factored into refinement of the vision and targets for this theme, along with implementing actions to help deliver the 2020 targets.

Note – the provisions derived from analysis of vegetation communities in this section have not considered Land Zone 2 vegetation types, those found on coastal dunes.  Such systems are considered in the plan’s Coastal and Marine asset section.

PA1. The extent of the region’s vegetation communities will be maintained at the 2013 baseline.

PA2. The diversity of vegetation communities will be maintained at 20134 levels and opportunities for sustaining species’ populations, particularly those that are threatened5, will be improved.

On-ground activities are implemented that address threats to the “health” of vegetation communities, including:

4 Most recent version of BVG coverage to be released by the Herbarium and pertinent species spatial data, including biodiversity planning assessments
5 Listed under NCA / EPBC or Regional Ecosystems scheduled as endangered or of concern under VMA
6 A process that threatens, or may threaten, the survival, abundance or evolutionary development of a native species or ecological community