Fresh water is a fundamental and limited resource, vital for the region’s social, ecological, economic and cultural sustainability.  It also underpins the health of the region’s wetlands, those broad-ranging ecosystems that are wet for at least some period of time.  See here for more information on wetlands.

The region’s freshwater asset comprises a diverse range of habitats associated with the major systems of the Burnett, Baffle, Kolan, Burrum and Mary catchments. There are also groundwater aquifers.  Larger aquifers such as the Coastal Burnett, Three Moon Creek Water Supply Scheme, Cooloola Sandmass and the Mulgildie Management Area of the Great Artesian Basin, are managed through State legislation to protect their viability.  Others, generally smaller and subject to reduced “irrigation take”, are not regulated but may be monitored.  All of these habitats range from the sources of the region’s surface waterways to their estuaries; they incorporate water pathways (connections) across and through the land, as well as the interfaces between surface and groundwater, including the critical interface between fresh and marine water.

Good water quality is crucial for the health of aquatic ecosystems and for the provision of consumptive supplies for urban, industrial and irrigation use.  The region’s major catchments flow into the receiving waters of Hervey Bay, the southern extremity of World Heritage Area Great Barrier Reef lagoon, and the Great Sandy Straits Ramsar site.  Thus, the quality of water exiting the region’s river systems is crucial to maintenance of the natural values of these marine environments that are internationally recognised for their outstanding values.

The Burnett Basin is the largest in South East Queensland covering 3.7 million hectares and including both coastal and inland catchments.  The Baffle Basin, located between Bundaberg and Gladstone, is relatively pristine with near natural flows throughout.  It is recognised for its high ecological and nature conservation values.  The southern major catchment, the Mary Basin, empties into the Great Sandy Straits Ramsar site and provides habitat for endangered and iconic species including the Mary River Cod, Mary River Turtle and Lungfish.

The region’s freshwater assets are defined using a combination of Wetland Mapping Classes (Dep’t Environment and Heritage Protection), Riparian Mapping and Groundwater Management Areas.  Further delineation by geographic area (catchment) for most wetland classes captures the discrete differences in asset sensitivity and adaptive capacity across the region. The following table provides an overview of the region’s freshwater asset.  A complete description is available in the background paper.  There are twelve wetland types identified for the individual “basins” of the region.  Each basin is identified by the final letter of the asset code, viz. a – Baffle Creek, b – Kolan River, c – Burnett River, d – Burrum River, e – Mary River, f – Coastal (Great Sandy Strait and Coastal Creeks).

For example FE2d below refers to coastal / sub-coastal floodplain grass, sedge and herb swamps in the Burrum River basin. 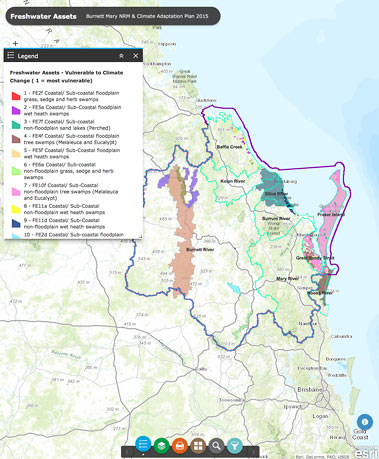 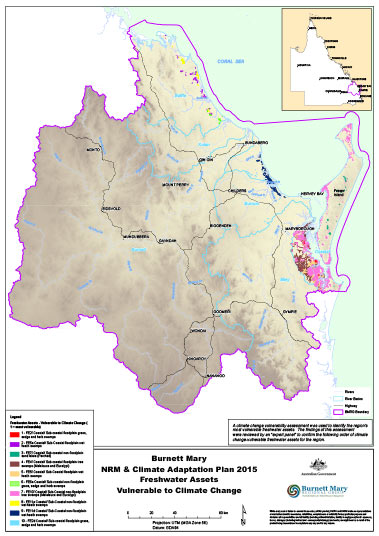 The vulnerability of each of the region’s freshwater wetlands to the climate change exposure indicators – temperature increases, increasing lengths of dry periods, decrease in Spring rainfall and more frequent and intense fires – was assessed by an expert panel.  Limited understanding of groundwater resources outside the identified Groundwater Management Areas, where monitoring and/or management is co-ordinated by the Queensland Government, precluded them from this assessment.  Coastal / sub-coastal floodplain grass, sedge and herb swamps in the Coastal basin (Great Sandy Strait and coastal creeks) and coastal / sub-Coastal non-floodplain wet heath swamps in the Mary basin were identified as the freshwater assets most vulnerable to climate change.  In general, coastal and sub-coastal wetland types were the most vulnerable wetland group.  The location of these vulnerable wetland types, as well as all of the region’s freshwater assets, is shown in the map.

Freshwater ecosystems of the region are healthy; their protection and management is underpinned by an increased public appreciation of their value and vulnerability to changes in landscape features, climate and human activity.

F1. The ecological function of water dependent ecosystems is improved from the 2015 baseline.

Wetland protection, restoration and maintenance activities will deliver improved “collective” function from the region’s wetlands, even though there may be changes in wetland extent, diversity and type as a consequence of climate change.

F2. The ecological connectivity within and between freshwater habitats (both aquatic and terrestrial) and the marine interface is improved from the 2015 baseline.

F3. The ecological importance and sensitivities of the region’s freshwater assets is better understood, more widely appreciated and more thoroughly considered in planning.

F4. The quality of riverine, coastal, estuarine and marine waters will improve in order to, at least, meet accepted water quality objectives.

Improved management of land-based activities so that sediment, nutrient and chemical entry to waterways is reduced.