Within the Burnett Mary

In June 2014 the BMRG hosted the Burnett Mary Climate Summit – the Science and Economics of Change to raise regional awareness regarding vulnerability to the impacts of climate change.  The summit was followed by a series of regional scenario planning workshops that encouraged participants to explore the implications of projected climate change on local issues, important to them.  The suggestions arising from the workshops have been considered in the drafting of this plan’s Targets and Desired outcomes.

BMRG also convened panels of scientists and local experts to:

Panels were convened for the asset classes – Coastal and Marine, Freshwater, Land and Soils and Plants and Animals. 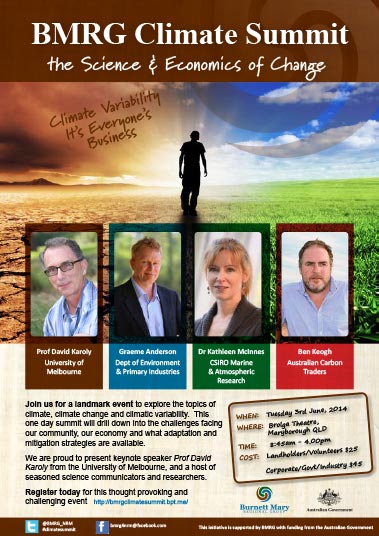 Beyond the Burnett Mary

BMRG has been an active participant in State and cluster1 organisations engaged in similar planning activities.  The Regional Groups Collective (RGC), the peak body for Queensland’s NRM groups convened a network of NRM planners across Queensland, to meet regularly, share information and strategies and provide a collaborative forum for plan development.  Under Stream 2 provisions of the Australian Government’s NRM Fund a Planners’ Working Group, to provide direct access to researchers and their East Coast Cluster-focused projects was established.  Key BMRG planning and operational staff members have been active participants of both networks, attending workshops, receiving direct research updates and collaborating over plan preparation.

1 Groups of Australian NRM organisations with biogeographical similarities, used for the targeting and collation of relevant data and studies