The landscape and oceanic processes of the Burnett Mary region have produced a dynamic and diverse coastal and marine environment.  The waters of the Burnett Mary region lie within the Tweed-Moreton marine bioregion, incorporating the landmark Fraser Island.  Fraser Island traps warm waters in Hervey Bay and creates the Great Sandy Strait, as well as marking the southern boundary of the Great Barrier Reef (GBR) lagoon – the world’s largest and most diverse coral reef system.  The region’s coast and waters are characterised by the interface of tropical and subtropical zones, producing some of Australia’s highest coastal and marine biodiversity.  This biodiversity underpins environmental, commercial and recreational pursuits in the region.

The diverse range of coastal, estuarine and marine habitats includes some that are conserved and protected under World Heritage or Ramsar listing and Queensland legislation. These habitats include:

This mosaic of habitats encompasses critical connections that enable the movement of water, sediment, plants and animals – connections essential for marine life processes.  As well as supporting marine life, coastal habitats play a vital role in addressing atmospheric levels of greenhouse gases.  They can capture and store carbon at up to forty times the rate of carbon capture by tropical rainforests.

The region’s coastal plants and animals include iconic and migratory species, such as shorebirds, grey nurse sharks, humpback whales, dugong and Indo-Pacific humpback dolphins. All rely on healthy and available habitat. The region hosts the east coast’s largest dugong population south of Torres Strait and six of the world’s seven species of endangered and vulnerable marine turtles. Of these, loggerhead, green and flat-back turtles regularly nest along the region’s foreshores. Other species have iconic or economic value and sustain our tourist and fishing industries.

Coastal, estuarine and marine habitats are often disturbed by natural events such as tides, floods and severe storms. This disturbance is normal, natural and essential for ecosystem health.  On the other hand, human-induced pressures can often “tip the balance”, reducing resilience and contributing to major biodiversity loss.  Pressures on coastal, estuarine and marine environments include coastal development, recreational and commercial fishing, public access, pests and weeds, and upstream land management with associated run-off.  Runoff management to minimise sediment, nutrient and pesticide pollution of waterways and marine and coastal environments is critical.

Balancing natural resource use, both on land and in the coastal and marine sphere, with healthy ecosystem function is central to the maintenance of these assets for use and enjoyment by future generations. 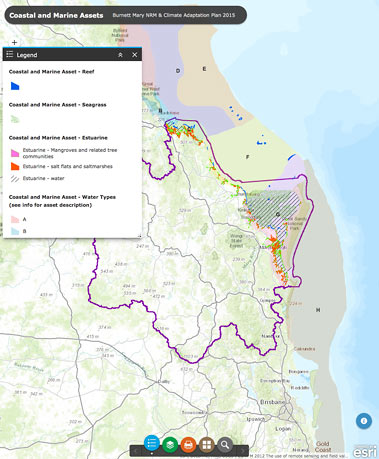 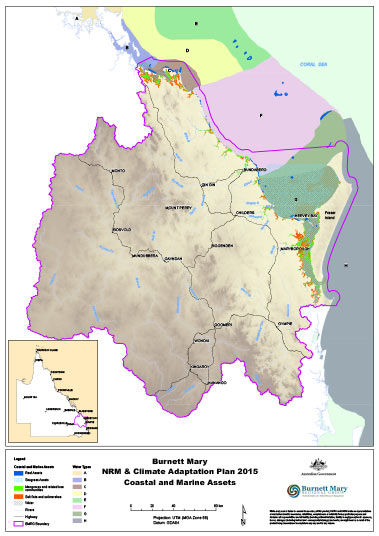 Coastal, estuarine and marine habitats of the region are identified as either benthic – those related to “the bottom” – or water types – subsets of the region’s oceanic waters classified on the basis of a range of characteristics.  Classification of the benthic habitats follows the classes adopted by the Queensland Wetlands Program:

Benthic habitats of the region are captured in Table 1.  Although classified, these habitats are yet to be comprehensively mapped.

The region’s water types, along with two important adjacent types, are identified in the second table.  They reflect differences in (1) wave energy regimes and (2) freshwater influence i.e. surface water runoff from land; collectively these determine the turbidity and temperature of each water type.  Some of the water types are further sub-divided into seascapes.  The extent of the water types and associated seascapes is captured in the map of coastal, estuarine and marine habitats.

A complete description of the delineation of this asset and the characteristics of each benthic habitat and water type is contained in the assets background report. 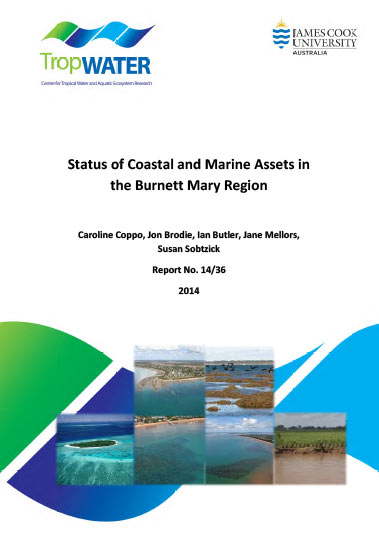 Status of Coastal and Marine Assets

The CSIRO and Bureau of Meteorology have used sophisticated models to project potential future climates based, broadly, on levels of greenhouse gas emissions.  The vulnerability of the region’s coastal, estuarine and marine assets was considered under 2030 and 2090 scenarios, considering both a high emissions state (RCP 8.5) and an intermediate state (RCP 4.5).  See the Climate Change in Australia website for additional information about climate scenarios or Background Paper – Coastal and Marine.

Coastal & Marine systems of the region were assessed by an “expert panel” of marine scientists; the systems are considered to be sensitive to the following climate change exposure indicators:

Coastal, estuarine and marine resources and their processes:

•    are healthy and resilient
•    are appreciated for their value and vulnerability to changes in climate and human activity
•    underpin our community’s industries and lifestyles.